Alexander Kanoldt was born 29 September 1881 in Karlsruhe, Germany and died in 1939.

Kanoldt went to Munich in 1908 and joined with the progressive artists who formed the New Artists Association. When the Association split over Kandinsky’s move to abstraction in 1911, Kanoldt stayed with them till it disbanded in 1912. He helped form the Munich New Secession in 1913 and remained there till 1920.

In the 1920s, together with Schrimpf, Mense and Davringhausen, Kanoldt was one of the ‘right wing’ New Objectivity artists in Munich who looked to Italy for inspiration. A painter of Italian landcapes and still lifes, Kanoldt was influenced first by Feininger and de Chirico and then by Derain and Carrà. 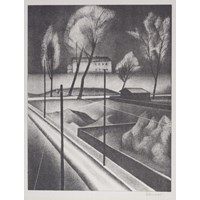