August Wilhelm Dressler was born in 1886 in Bergesgrun, Bohemia, and died in 1970 in Berlin.

Between 1906 and 1913, while studying at the academies in Dresden and Leipzig, Dressler came into contact with Otto Dix, Kurt Günther and Bernhard Kretzschmar.

In 1919, Dressler joined the Novembergruppe, exhibiting with them the following year. He was also a member of the Berlin Secession.

His work appeared in exhibitions there, and at other venues in Berlin and Amsterdam throughout the 1920s. A one-man show of his work was held in Chemnitz in 1929.

In 1938 Dressler was branded as "degenerate" and dismissed from his position at the United State Schools in Berlin, where he had been teaching since 1934.

After World War II, he resumed exhibiting in Berlin, and in 1956 he obtained a teaching position at the Master School for Applied Art in West Berlin. (ref: Galerie St Etienne online) 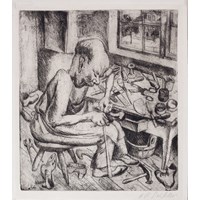