Before World War I he attended the Munich Academy for a short time. In 1913 his first woodcuts appeared in various periodicals, and in 1915-1920 he joined the Dada movement.

He produced 'Schadographs', that is a photograph without a camera. He was in Italy 1920-25, where he began to paint in the Neue Sachlichkeit manner, including a 1925 portrait of Pius XI.  He then went to Vienna and in 1928 to Berlin, and then in 1935 he took over a retail business.

In 1943, after the destruction of his studio, he moved to Kelberg near Ashaffenburg, where he was commissioned by the town to copy the Stuppach Madonna of Grunewald. From 1950 he was involved with 'magic paintings' and from 1960 he again experimented with the photogram. 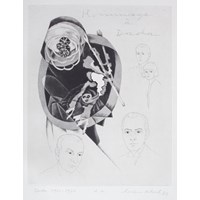