He graduated with a diploma in engineering from the Royal College of Science and Technology in Munich in 1905, but was devoted to art, and after graduating, Kirchner and fellow ex-students Fritz Bleyl, Erich Heckel and Karl Schmidt-Rottluff founded the artist group “die Brücke” (the Bridge) located in Dresden and from 1911 in Berlin. “Die Brücke” became an important avant-garde group in Germany until the group was dissolved in 1913 following ongoing conflicts between Kirchner and other group members.

In 1912, Kirchner met the dancers Gerda and Erna Schilling who posed for him in subsequent years. Erna became Kirchner’s partner until his death.

After military service in Halle during the first years of the war, Kirchner suffered a mental and physical breakdown and in 1917 he moved to Davos, in Switzerland, where the Wildboden House became his home and a contact point for artists, such as Müller and Scherer, who came to visit and work with him.

In 1937, after Kirchner had gained an international reputation, the National Socialists removed 639 of his artworks from museums following the Nazi programme of confiscating “Degenerate Art”. In the same year, the Art Institute Detroit in the USA and the Kunsthalle Basel mounted Kirchner exhibitions. Kirchner committed suicide in 1938.

The rejection of the academic tradition and Kirchner’s interest and fascination for German medieval art and craft as well as African and Melanesian art led to the simplification and reductionof figurative forms in his work. One of the most creative and powerful Expressionist artists, Kirchner’s subjects vary greatly and include nudes and interiors, as well as coastal and cityscapes, including the famous Berlin street scenes.

His work uses diverse materials and techniques, varying from the production of paintings and woodcuts, to furniture and sculpture. 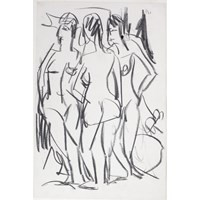 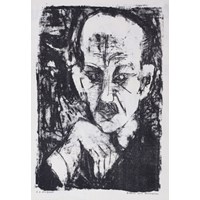 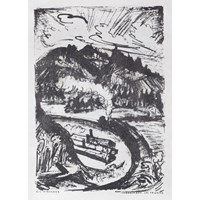 Landscape in the Taunus