He studied at the Fine Art Academies in Berlin and Königsberg, studying painting under Ludwig Dettmann and printmaking with Heinrich Wolff. In 1926 he was appointed professor at the Weimar Academy, but was later forced out by the Nazis.

Before the First World War, in which he served at the front as an ordinary soldier, Meseck concentrated on painting; after the war he turned to printmaking, becoming especially known for his drypoints. Meseck was a member of the Berlin Secession, and contributed to leading journals such as Ganymed, as well as illustrating works by Shakespeare, Goethe, Novalis, and Brentano. Much of Felix Meseck's work was destroyed in the Red Army attack on Danzig in 1945.

Trees are a recurring motif in his art, and may bring to mind the ravaged landscapes of the First World War. There was a retrospective exhibition with catalogue at the Museum Höxter Corvey in 1987. 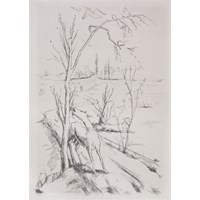 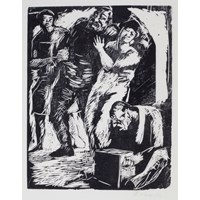 Group of Three With Beggar