Like many of his colleagues, Grosz originally appreciated the rise and outbreak of the First World War as a chance for social and political change and he volunteered briefly between 1914 and 1915 and in 1917. However, he was soon confronted with the cruel and horrible reality of war and its consequences. He was discharged from military service in 1917 after suffering a nervous breakdown.

His political affinities after the end of the war are reflected in his membership of the Communist party in 1918 and his activities as a writer for the communist newspaper “der Rote Knueppel” (The Red Cudgel) from 1923-1927.

Grosz can also be considered as one of the key members of the Berlin Dada movement from 1918-1920. Throughout his career some of Grosz’s works had been censored, often for their obscene tendencies, such as the “Ecce Homo” portfolio of drawings which was confiscated in 1923.

When in 1933 the National Socialists confiscated his works from public museum collections, Grosz emigrated to New York, USA where he became a teacher at the Arts Students League and the Sterne-Grosz School.  In 1959, he returned to Berlin and died in the same year.

The painter, draughtsman and printmaker George Grosz is well-known for his satirical works often containing political and social criticism as well as portraits depicting stylized types and caricatures of members of the German post-war society. While Grosz’s earlier style is influenced by Expressionism and Futurism, his works produced during the 1920s show stylistic and formal elements of the “Neue Sachlichkeit” movement. 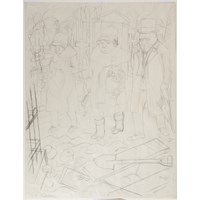 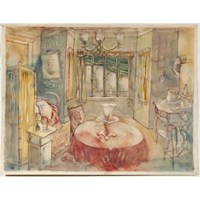 Interior of a Room in Berlin 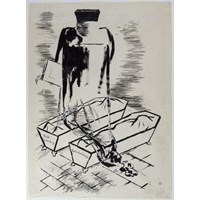 In Memory of Rosa Luxemburg and Karl Liebknecht 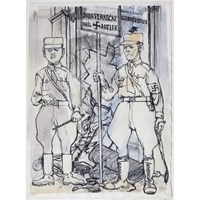 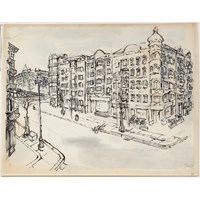 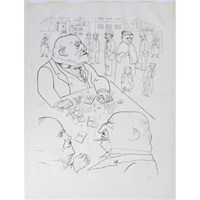 The Toads of Property