He was a Jewish refugee who fled Germany with his family and moved to Prague and then London before finally settling in Dowlais, Merthyr Tydfil, Wales. His mother Paula, however, couldn’t join them in London as she suffered from arthritis, and was sent to her death at a concentration camp.  His father Joachim set up a zip factory on the Treforest Industrial Estate, Merthyr Tydfil, while Heinz studied in a London art school.

Anna Canby Monk, of the Centrum Judaicim, says Koppel came to Dowlais at a time when art was just beginning to break in the Valleys, and artists were finding rich and substantial subject matter in the rundown industrial towns and their inhabitants. Koppel had more access than most to the lives of these working-class families as he taught painting to adults and children in Dowlais. 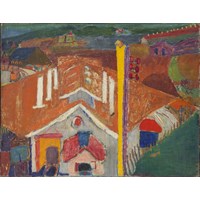