His father, Emil Seewald, originated probably from Bavaria or Tirolia. His mother was from a Swiss family.

Seewald became a Swiss national in 1939 and at the time of his death he had Swiss nationality and may have still held his German nationality too. Seewald and his wife donated their estate to a Swiss foundation showing his close personal relationship to the country.

He was a painter and illustrator. 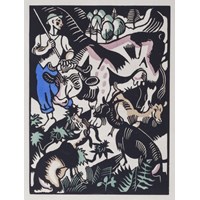