He spent the first few years of his life in New York, where his father was on business, but the family returned to Germany several years later. Erbslöh enrolled at the Karlsruhe Akademie in 1901 and then in 1904 at the Munich Academy.

He was a co-founder and secretary of the Neue Künstlervereinigung Munich (NKV), which included Kandinsky, Jawlensky, Münter and Werefkin.

After travelling in Italy, Erbslöh was conscripted into national service in 1914, serving as a war painter on the Western Front throughout the war. In 1916 he joined the 'Munich New Secession'.

The 1920s saw him taking numerous journeys, on which he painted landscapes. From 1927 he lived mainly on Lake Constance and in Upper Bavaria, where he finally bought a house in the Isar Valley in 1934.

After a major retrospective at the Barmen Kunstverein in 1931, nothing more was heard from Erbslöh. Since exhibiting and working in public were no longer possible from 1933, the artist lived in retirement with his family at Irschenhausen. There he painted a great many portraits of family members and friends and also captured his immediate surroundings in small formats. (ref: Ketterer Kunst website). 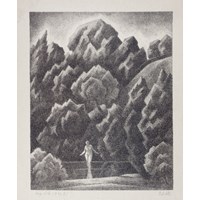 Bathing Woman by the Waldsee 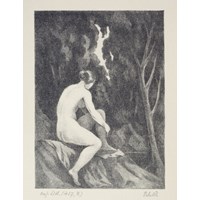 Female Nude in the Forest 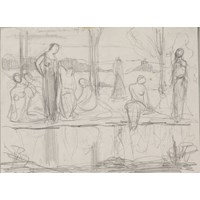