In 1916 Ehrhardt visited the travelling exhibition “Der Sturm” in Berlin and thus saw works by Picasso, Schwitters and Marc. This caused him to get in touch with the manager of the Sturm and find out more. Deciding that he needed to approach painting from ‘a new spiritual and social viewpoint’, he terminated his studies in jurisprudence and joined the Novembergruppe which had been founded in 1918. Ehrhardt was also influence by the Blaue Reiter artists, Futurism and by Robert Delauney’s Orphism.

He exhibited in the Dresden Secession in 1919, Berlin in 1920, the exhibition of Munich Expressionists in Chicago in 1921 and in Dusseldorf in 1922.

He broke with some of the style of Expressionism, and produced mostly colourless works in these years. He was most interested in the destruction of the human figure and documented this in numerous watercolour sketches.

He continued painting through the Nazi years and was conscripted in 1939. Following the war he continued to work and moved from the German Democratic Republic to Schwarz in Hesse in 1966 to gain more liberty. (ref: curt-ehrhardt.com) 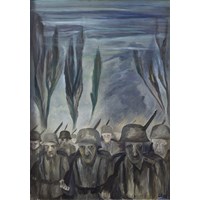 March to the Front or The Three German Soldiers