Friedrich Karl Gotsch was born on 3rd February, 1900 in Kiel-Pries, Germany and died on 21st September, 1984 in Schleswig, Germany.

Gotsch volunteered for the military from 1918 to 1919 and then began to study, which he soon gave up again. In 1919 Gotsch took private lessons with the painter and graphic artist Hans Ralfs in Kiel.

In 1920 the artist had his first solo exhibition at the 'Kunsthalle Kiel'. In 1920 he transfered to the 'Sächsische Akademie der Künste' in Dresden, where he first studied under Hettner, and the, from 1921 to 1923 as a master student under Kokoschka. During these early years his style was strongly influenced by the Expressionist paintings of his teacher, which he accentuated with graphic elements.

During the subsequent years a prolonged trip to the USA was followed by study visits to Paris (1926/27), Italy (1928), Southern France (1929) and Munich (1932/33). In 1933 the artist moved to Berlin, but there, the Nazis increasingly hindered his work. In 1939 Gotsch was drafted and served in the war, working mainly as an interpreter. His Berlin studio was destroyed by bombs.

In 1945 the artist returned from a British prisoner-of-war camp to Eiderstedt. Gotsch, who mainly worked in culture politics in the post war years, refocused entirely on his artwork from 1951. After a phase of intensive studies of Picasso's Cubism and experiments with abstract techniques, the artist developed the 'late Expressionism' which was typical for his later work. 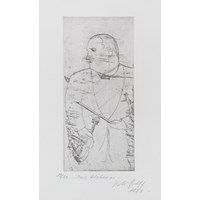