Frits Gross was born in 1895 in Vienna and died in 1969 in London. Gross studied in Vienna and Paris and is known mainly as the architect who evolved 'open plan' design, first seen in 1929.

He and his family came to London in 1938, invited by the President of the Royal Institute of British Architects, to escape Nazi oppression. During the war he taught art and architecture at the Bedford School and Cambridge, then returned to architecture in London. 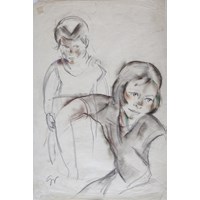