Gabriele Münter (1877-1962) was born in Berlin. She moved to Munich and became pupil and partner of Kandinsky in 1902 after he and further members of the “Phalanx” group had opened an art school. Münter and Kandinsky travelled through France between 1906 and 1907.

After her return to Germany, in 1908, the couple moved to Murnau where their home became a summer colony for her, Kandinksy and the artists Jawlensky and Werefkin in the forthcoming years. Before the outbreak of the First World War, Münter was involved in many exhibitions in Munich. For example, she exhibited with the “Neue Künstlervereinigung München” in 1909 and 1910, twice with the group “der Blaue Reiter” in Munich, in 1911 and 1912 and in the context of the “First German Autumn Salon” in 1913 in Herwarth Walden’s Gallery der Sturm. After the separation from Kandinsky in 1917 she settled in Stockholm for one year where her flat became an important forum for the Stockholm avant-garde. Between 1917 and 1920 she painted and taught painting in Copenhagen and returned to Munich in 1920.

Gabriele Münter’s subject matter and motifs vary and include landscape, portrait, interior and still-life. Although using and experimenting with a wide range of techniques, Münter is best known for her lino-cuts.

During the Phalanx period her style was affected by the Jugendstil, through her stay in France she encountered Impressionism. Moreover, her works produced before her settlement in Stockholm show a great interest in Bavarian folk art and reflect an engagement with religious motifs and Bavarian glass painting techniques. With her stay in Stockholm, Münter shifted away from “Bavarian primitivism” towards more psychological motifs.

Watch a film about Gabriele Münter. 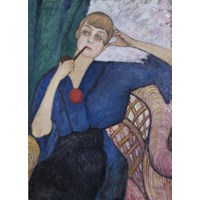