Goldschmidt knew the painter Marianne Werefkin and her partner Alexei Jawlensky, and also the writers Rainer Maria Rilke and Thomas Mann. Training initially in book design, her admiration for Der Blaue Reiter prompted her to begin painting, and when the Dresden Academy opened its doors to women for the first time, Goldschmidt enrolled, studying there from 1920 for three years.

Taught by Oskar Kokoschka, her work became expressionist, uniting strong colour and simplified form. She travelled, working and exhibiting in New York in 1923, and visiting Paris in 1926, where she took a studio in Montparnasse. Her interest in Van Gogh led her to visit the son of Dr Gachet, where she saw his collection of the artist's works. She had her first solo exhibition at the Gallery Caspari, Munich in 1932.

Following the rise of the Nazis, Goldschmidt moved to Britain. She settled in the Lake District where she befriended fellow refugee Kurt Schwitters. According to Joseph Paul Hodin in his book on Goldschmidt, Way of Life (Portland, Oregon 1976), The Sphinx is set in the Langdale landscape.

Throughout her career she continued to experiment. In the 1960s she made a series of abstract works, and her first visit to Israel in 1968 prompted a group of coloured monotypes. Goldschmidt had exhibitions at the Kiinstlerhaus, Vienna in 1975, and at Camden Arts Centre. London in 1976. Hodin quoted from a letter written by the artist at the age of seventy-five: 'I am a late flower. The experience of painting and the creative urge is stronger now than it was when I was thirty or forty." (from www.artfortune.com) 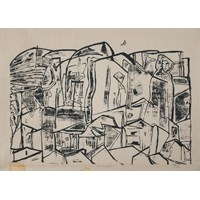 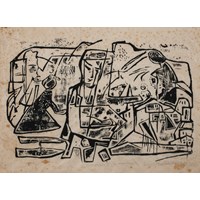 In the Studio III: The Mountain