From 1891 until 1894 Cissarz studied at the academy of arts in Dresden, where he also worked as a graphic artist and designer.

In 1916 Cissarz settled in Frankfurt, teaching painting at the Städel Art Institute until 1939.

Johann Vincenz Cissarz was known for his paintings, illustrations, posters and typography. 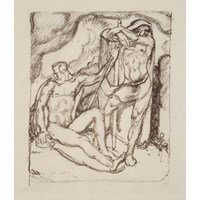