He was a painter and graphic designer. Scharl trained as a decorative painter at the Munich School of Painters, where he gained practical experience in the restoration of paintings and attended evening classes. In 1915 he was drafted into military service. War injuries and a temporary paralysis of his right arm forced him to remain in various military hospitals until 1918.

Back in Munich he could finally begin studying at the Kunstakademie in 1919 and began working as an independent artist in 1921. He joined the artist groups 'Neue Sezession' and the 'Juryfreien' and successfully participated in their exhibitions. The Nazis did not like his work and banned him from painting. Scharl's emigration plans were enforced by an invitation of the Museum of Modern Art in New York to take part in an international exhibition together with Beckmann, Scholz, Heckel and Hofer and in 1939 he emigrated to the USA.

Albert Einstein, whom Scharl had met in Berlin, supported him financially and helped him to organise various exhibition projects. The years 1944-46 marked the peak of his fame in the USA. For 'Pantheon Books' he illustrated the Brothers Grimm's Fairy Tales, a book which met with huge public interest and garnered further orders for Scharl, but he was burdened with worries for the family members he had left in Germany, and was also suffering from a stomach illness.

In 1952 Scharl was nationalised in the USA and he travelled to Switzerland to take part in a group exhibition in Geneva. The air in Switzerland had a positive effect on his health and many new works were executed but he returned to the USA in 1953 where his health declined and he died the following year. (ref: Ketterer-Kunst online). 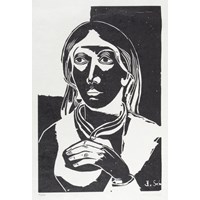 Portrait of a Young Woman II