Marcel Frishman was born in 1900 in Lodz and died in 1952. He studied at the Berlin Academy in the early 1920s and in 1926 he joined the staff of the political and satirical weekly 'Simplicissimus' as a cartoonist. When the magazine was taken over by the Nazis in 1933, he was compelled to leave Germany, working in Copenhagen and then, in 1937, Australia where he remained for 13 years, working in factories. In 1950 he returned to Europe with deteriorating health to continue his work. 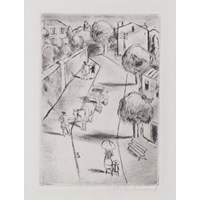