Sculptor, painter, draughtsman and printmaker, Margarete Klopfleisch (née Grossner) was born in Dresden in 1911. War, and the catastrophic economic problems which followed, brought great financial hardship. The resultant ill health and fervent left-wing views which she acquired as a young woman dominated the rest of her life.  Her early ability in art was awakened when she was a model for a life-drawing class run by Otto Dix, at the art school in Dresden. When she asked for advice on how to begin as an artist, Dix is said to have replied, ‘Just take a pencil and paper and start’.

She joined the German Communist Party in 1931 and fled to Prague two years later when the Nazis came to power, joining her future husband Peter Klopfleisch. From there, she continued her political work whilst studying art and building links with members of the Expressionist movement, joining the Oskar Kokoschka League of Anti-Fascist Artists in 1937. When Hitler’s troops marched into the Czech Republic, Gretel had to flee again. On the 9th March 1939 with the threat of war looming, she emigrated to England on the last transport to leave the Czech Republic.

In England she was employed as a housekeeper by Roland Penrose who in turn helped her with further studies, and she attended Professor Carter’s art classes at the Reading University. Roland Penrose was a personal friend of Picasso and his house was full of Picasso’s artwork.

In England she worked and exhibited with societies such as the Free German League of Culture and the Artists International Association. In 1940, in common with many émigrés to England, she was interned on the Isle of Man, and whilst there suffered a miscarriage, a deeply traumatic experience, which prompted the creation of the sculpture and maquette ‘Despair’. After her release she exhibited in London, Maidenhead, Cookham, Glasgow and Reading.

She returned to Dresden in 1960 with her two daughters on a ‘holiday of no return’, eventually joined by her husband, but battled to gained artistic recognition against disinterest from the GDR authorities. One year before her death however, she was successfully admitted to the Dresden Artists’ Union. Subsequently an exhibition took place in 1987 at the John Denham Gallery, London.

Her daughter now lives in Leicestershire and has devoted much of her life to preserving and promoting her mother’s artistic legacy. An entry is also in The Dictionary of Artists in Britain Since 1945, (1998) edited by David Buckman. 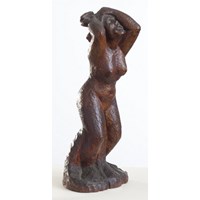 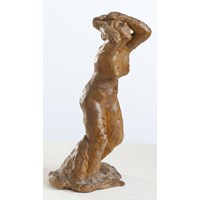