He attended the School of Arts and Crafts in Berlin-Charlottenburg and was heavily influenced by the artists of Die Brucke. Although he made prints form 1916, his most characteristic paintings were done after the First World War, in which he served as a hospital orderly and met Heckel.

His sensitive pictures of alienated and lonely figures did not find favour with the Nazis and his paintings were removed from public view in 1937. The following year he was dismissed from his teaching post at the Vereinigte Staatsschulen.

His home and studio, containing over 200 paintings and many drawings and prints, was destroyed in the Second World War by Allied bombs in 1943, and just two days before the end of the war, Russian artillery destroyed what was left of his graphic work.

In July 1945 he accepted an appointment at the Berlin academy, where he taught until retiring in 1968. After 1945, his work was less expressive with form dominating content. 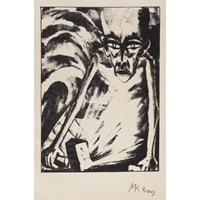 From The Legend of Saint Julian the Hospitable