Ziegler was entirely self-taught and turned to painting full-time after the First World War at the age of 29. He travelled extensively and his Italian landscapes show an awareness of cubism.

In 1925 he settled in Berlin and depicted the Berlin bourgeoisie, prostitutes and showgirls. Although he shared the same subject matter as George Grosz, Ziegler’s approach is sympathetic and humorous rather than satirical. He was an acute observer of the social scene.

After his move to England in 1937 he worked as a cartoonist and illustrator under the name of Robert Ziller and produced the anti-Nazi book We Make History in 1941. 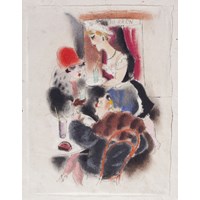