Emil Nolde (1867-1956) was born as Emil Hansen in Nolde, a town in the North of Germany. He was initially trained as a woodcarver but started to paint as an independent artist in 1898. Before he settled in 1903 in Alsen during the summer and in Berlin during the winter, he had undertaken trips to Paris and Copenhagen.

In 1906, he became a member of the “Berlin Sezession”, which he left in 1910. In the same year, Schmidt-Rottluff invited him into the “Brücke” group but he left the group in 1907. During this time, Schmidt-Rottluff taught Nolde the woodcut technique.

Between 1913 and 1914 Nolde and his wife Ada joined an expedition to the South Seas where Nolde discovered the so-called “primitive” art, which later influenced his style. Nolde spent the period of the First World War in Utenwarf in the North of Germany. When the National Socialists gained power in Germany, Nolde became a member of the National Socialist party. However, Nolde’s art was declared as “Degenerate Art”, and included in the Munich “Degenerate Art” exhibition in 1937.

Many of Nolde’s works are now lost.  Some of the 1052 confiscated works by the Nazis were destroyed, and in 1944, an air raid destroyed his studio in Berlin, including his archive and many of his works.

Emil Nolde was a printmaker and is known for his etchings, created using an innovative brush technique. In addition, he is also recognised for his oil and watercolour paintings. Throughout his career, native landscapes and seascapes were a recurring major theme.

During his “Brücke” period, he experimented with the Expressionist theme of urban night life and from 1909 onwards he engaged with religious and biblical motifs. His expedition to the South Seas and the “primitive” art he discovered, influenced his later style. 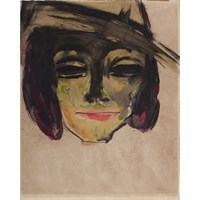 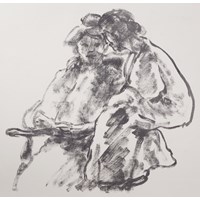 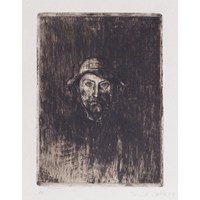 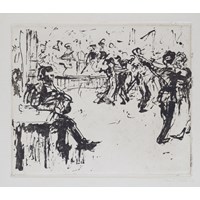