Ernest Neuschul was born in Aussig, a small town in what is now the Czech Republic. He studied in Prague and later Vienna, where he was fascinated by the paintings of Klimt and Egon Schiele and the expressionistic works of Oskar Kokoschka.

At the outbreak of World War I Neuschul avoided conscription, moving to Cracow, Poland in 1916. After the war ended he moved to Berlin, joining the Academy of Arts where he won the Rome prize for outstanding achievement. In 1919 Neuschul’s first one-man exhibition opened in Prague.

In Berlin Neuschul embarked on an active productive period, painting under the post-war influence of the New Objectivity (Neue Sachlichkeit) movement. In 1926 he joined the Novembergruppe, first founded in 1918 and a vigorous opponent of Fascism. He also got to know Ludwig Meidner who was painting expressive and highly emotional figure subjects often with a religious theme.

Neuschul’s work during the 1920s took a more hard-edged and socially committed look at day-to-day life under the Weimar Republic. Unlike other painters of the New Objectivity movement, Neuschul’s socially critical art embodied his innate compassion for his fellow men and women, irrespective of whether they were urbanised industrial workers or drawn from the demimonde of cabarets and city nightlife.

In 1932 Neuschul became Professor of Fine Arts at Berlin’s Academy of Fine Art and was also elected chairman of the Novembergruppe. In 1933 however, an exhibition of his paintings was closed down by the Nazis. Because of his Jewish birth and radical political opinions Neuschul also lost his teaching post and in March 1933 he returned to Aussig accompanied by his wife Christl.

In 1935 Neuschul was invited to exhibit and work in the Soviet Union, painting portraits of steelworkers and revolutionary figures and even gaining a double portrait commission of Stalin and Dimitroff. In 1937 however several of Neuschul’s paintings on exhibition in Aussig were vandalised and disfigured with swastikas, a grim foretaste of what awaited him and his family if they remained.

Neuschul, his wife and child eventually escaped the Nazis on the last train out of Czechoslovakia, eventually arriving in London in 1939. In 1959, a one-man exhibition was held at the Betzalel National Museum in Jerusalem and in 1966 a major retrospective exhibition in Berlin with the title ‘From the New Objectivity to the New Non-Objectivity’.

Watch a film about Ernst Neuschul. 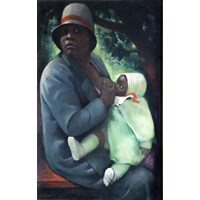 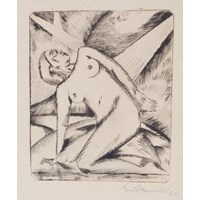 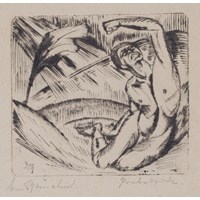 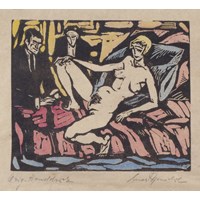 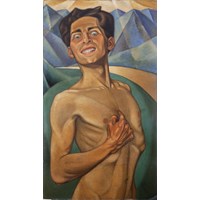 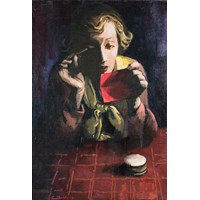