Grundig studied 1920 - 1921 at the Dresden School of Arts and Crafts. He went on to study at the Dresden Academy from 1922 - 1923. During the 1920s his paintings, primarily portraits of working-class subjects, were influenced by the work of Otto Dix.

Like his friend Gert Heinrich Wollheim, he often depicted himself in a theatrical manner, as in his Self-Portrait during the Carnival Season (1930). He made his first etchings in 1933.

Politically anti-fascist, he joined the German Communist Party in 1926, and was a founding member of the arts organization Assoziation revolutionärer bildender Künstler in Dresden in 1929. Following the fall of the Weimar Republic, Grundig was declared a degenerate artist by the Nazis, who included his works in the defamatory Degenerate Art exhibition in Munich in 1937. 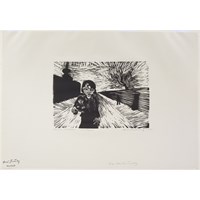 Children of the City: Little Girl with Doll