Käthe Kollwitz (1867-1945) initially trained in painting but is primarily known for printmaking and was also a sculptor. Unlike many other female artists at that period, her father, who recognised her drawing talent and approved her aim to become a painter, arranged private drawing and painting lessons before she went to the art school for women in Berlin.

Kollwitz spent most of her life in Berlin, where she married a medical practitioner who worked in a poor area of the city. As a result, Kollwitz was daily surrounded by hunger and death, which is often reflected in her work. She never recovered from the death of her son Peter in 1914 during the First World War, and death, sacrifice and mourning became leading themes in her works.

In 1919 she became the first female professor at the Prussian Academy of Art (Akademie der Künste), from where she had to resign in 1933 during the Nazi regime. Although she was forbidden to exhibit during the Hitler regime, her art was never classified as “Degenerate Art” and the Nazis even made use of her images for their own propaganda. Many of her works are lost due to the destruction of her apartment in Berlin during the Second World War. She died in Moritzburg only weeks before the end of the war.

Influenced by the realists Max Klinger and Wilhelm Leibl, Käthe Kollwitz turned early in her career away from Naturalism to emotional motifs and simplifying compositions. Her work often has a social intention and carries social criticism. Poverty, oppression, war and injustice are central motifs in her prints as can be seen in her first successful etching series “The Weaver’s Revolt” from 1897.

Kollwitz produced 275 prints, in which she favoured the technique of etching until 1911 before she turned to lithography. In 1920 and under the influence of Ernst Barlach, she produced mainly woodcuts. 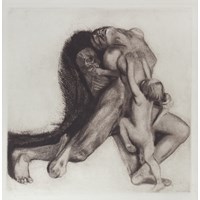 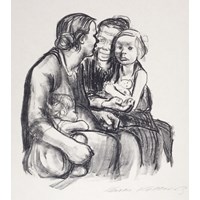 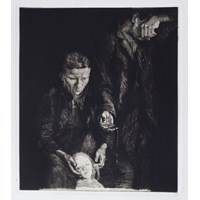 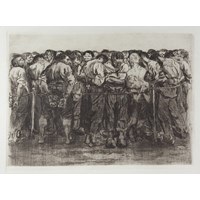 The Prisoners (Plate 7 from the Peasants' War) 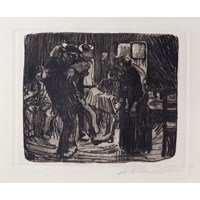 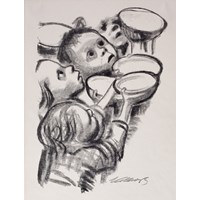 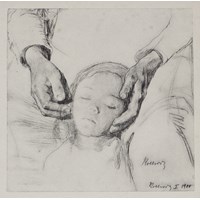 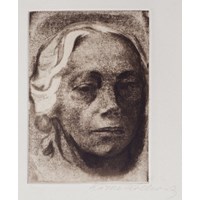 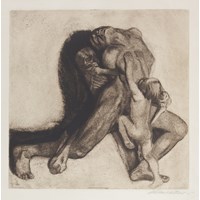 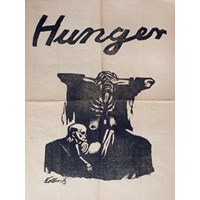 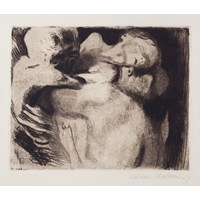 Death and Woman Wrestling for the Child 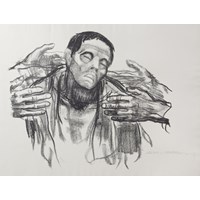