Pechstein joined the Army in 1915 but his experience of the First World War led to his rejection of war. By the end of the War he became a member of the “Arbeitsrat fuer Kunst” in Berlin and founded the left-wing orientated socialist artist group “Novembergruppe” in 1918.

During the National Socialists period, Pechstein’s works were declared as “Degenerate Art”.  326 of his works were removed from public collection and many of them destroyed. He was forbidden to paint after 1933.

Like the work of many of the other “Brücke” members, Pechstein’s early work is influenced by an interest in South Sea art and culture. Experiments with Southern Pacific art regarding form and style can be observed in his work towards the end of the “Brücke” period and afterwards. In addition, the influence of Matisse can be found in many of his earlier works. Although he is commonly known for his paintings and graphic arts, Pechstein also created decorative arts, furnishings and sculptural arts. He produced around 900 prints mainly from 1906-23.

After the First World War, his work often combines Expressionist elements and Socialist propaganda. In his later work, Pechstein distances himself from the Expressionist style.

Watch a film about Max Pechstein. 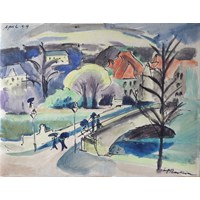 The Bridge at Erfurt 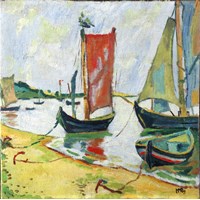 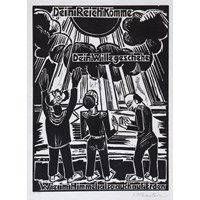 Thy Kingdom Come, Thy Will be Done, on Earth as in Heaven 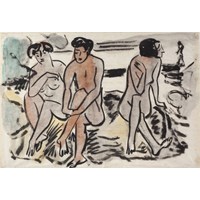 Three Nudes on a Beach 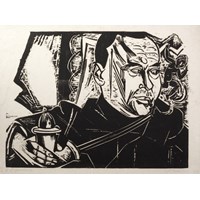 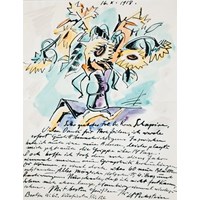