Otto Dix (1891-1969) studied in Dresden from 1910-1914 and was a painter of wall-decorations until he taught himself painting. Like many artists, Dix was initially enthusiastic when the First World War broke out and was a soldier throughout the war. During this time Dix, who soon discovered the brutality of war, produced numerous war drawings.

At the end of the war, Dix went to Dresden where he was a founder member of the Dresden “Sezession Gruppe” in 1919 and became briefly involved in the Dada movement. He also befriended Conrad Felixmüller who taught him printmaking.

After he moved to Berlin, he became involved with the “Novembergruppe” and was soon supported by the “Galerie Nierendorf”. In 1925 Dix was one of the leading artists in the exhibition “Neue Sachlichkeit” in the Künsthalle Mannheim.

With the rise of the Nazi regime in Germany, Dix lost his teaching position at the “Preussische Akademie der Künste” in 1933. Some of his works were part of the “Degenerate Art” exhibition in Munich in 1937 and 260 artworks were removed from museum collections. He was also forbidden to work and exhibit during the Second World War.

After the war, Dix was recognised as an artist in both the Federal Republic as well as the German Democratic Republic.

Otto Dix, painter, printmaker and watercolourist, is known for war scene sketches produced while volunteering in the First World War and his grotesque depictions of postwar society. His early work is influenced by Expressionism, especially by the “Brücke” painters and their use of form and colour. After Expressionistic experiments, Dix turned to the “Neue Sachlichkeit” movement during the 1920s aiming to represent a “realistic” image of postwar society. In addition to the war scenes Dix created throughout his career, his production of critical portraits representing certain society types, such as prostitutes or veterans is notable.

Watch a film about Otto Dix. 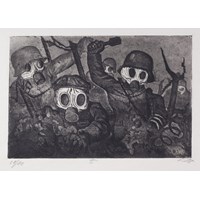 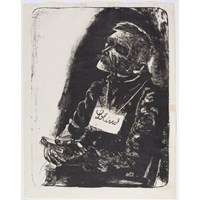 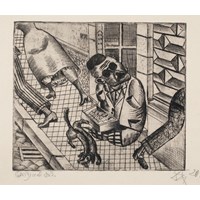