Wilhelm Lehmbruck (1881-1919) was born in Meiderich and studied at the School of Arts and Crafts as well as at the Academy of Art in Düsseldorf.

On trips to Paris he discovered the works of Aristide Maillol and Auguste Rodin who influenced his further work. Between 1910 and 1914 he lived in Paris but moved to Berlin with the outbreak of the war in 1914. He joined the army, where he became a medic, but was discharged from the army in 1916, when he escaped to Switzerland to recover from the trauma and depression the war had caused.

He returned to Berlin in 1919 where he committed suicide. In the 1920s, the well-known gallery owner Paul Cassirer published some of Lehmbruck’s prints. During the Hitler regime Lehmbruck’s works were posthumously condemned as “Degenerate Art”.

Wilhelm Lehmbruck was a sculptor, draughtsman and printmaker. His main productive period was between 1910 and 1919. He is recognised for his sketch-like style in drypoints, lithographs and engravings depicting one or more slender and emotional figures often expressing sad and mournful gestures. 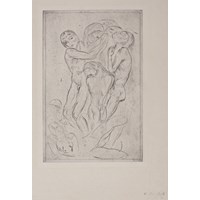 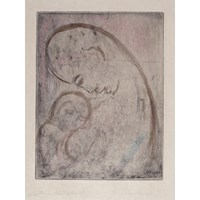