Conrad Felixmüller (1897-1977) was born in Dresden, where he also studied. In 1915 he met Ludwig Meidner, with whom he shared a studio in Berlin, and in 1916 he and Lyonel Feininger exhibited in Herwarth Walden’s Gallery der Sturm.

He served as a medical orderly in the First World War.  He and his wife Londa lived in Dresden until 1931 when they moved to Berlin. During the Dresden period, Felixmüller was a member and founder of several groups which reflect and represent his artistic and political affiliation towards the end and after the First World War. For example, in 1917 he founded the “Expressionist Working Community” with Felix Stiemer and Walter Rheiner; he was a member of the “propaganda committee of the Socialist Group of Intellectual workers” in 1918 and the German Communist Party (KPD).  Moreover, Felixmüller became president of the “Dresden New Secession Group” in 1919 which included members such as Otto Dix and Gela Forster, and he was member of the 1919 “Novembergruppe” founded by Max Pechstein and Cesar Klein. His membership of some of those groups later made him a target for the National Socialists.

In 1933 and 1937 some of Felixmüller’s artworks were part of “Degenerate Art” exhibitions in Dresden and Munich. Many of his works are lost today due to the confiscation of his artworks from public collections by the Nazis.  An air raid destroyed his Berlin studio in 1944.

Felixmüller gained international recognition as an artist at exhibitions in Bologna and Rome in 1971, and the first prize at the IV International Graphics Biennale in Florence in 1974.

Felixmüller’s work includes paintings, graphic work and a few wood sculptures created around 1923. His early work is influenced by the Expressionist style but he created his last Expressionist painting, “the Death of the Poet Walter Rheiner”, in 1925.  From then onwards, his subject matter, style and tone become increasingly realistic, and include working class depictions and private scenes.

In 1994 the first UK retrospective exhibition of Felixmüller’s work took place at the New Walk Museum, Leicester (17 September-30 October 1994). The title of the exhibition was “Between Politics and the Studio: Conrad Felixmuller 1897-1977”. Over 100 paintings, works on paper and sculptures were exhibited, with a complementary exhibition of graphic work which took place at the Courtauld Institute, London, organised by Dr. Shulamith Behr. 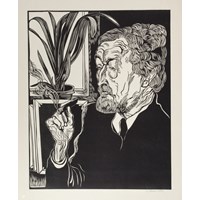 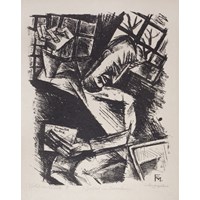 Soldier in the Madhouse II 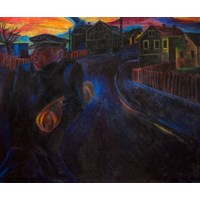