The painter and printmaker Otto Mueller (1874-1930) was born in Liebau, Silesia.

Before studying painting at the Dresden Academy of Art between 1896 and 1898 he had been a lithographer in Görlitz. In 1898, he moved away from the big city life to the mountains of the “Riesengebirge”, a lonely area where he spent the following 9 years until he moved to Berlin.

In 1910, he became a member of the “Neue Sezession”, an artistic group founded by artists such as Pechstein and Tappert in opposition to the “Berlin Sezession” and was included in their exhibition “Rejects of the Berlin Secession” taking place in the same year. Following an invitation of the “Brücke” group, Müller became a member until the group dissolved in 1913 and exhibited as part of “die Brücke” in the “Blaue Reiter” exhibition in Munich and the Cologne “Sonderbund” exhibition in 1912.

Mueller volunteered during the First World War between 1916 and 1917. He became professor at the Breslau Academy in 1920, and he remained in Breslau until his death. However, regular trips to Eastern Europe throughout the 1920s affected Mueller’s subject matter. During the Nazi regime, his artworks were posthumously declared as “Degenerate Art” and over 357 of his works were removed from public collections.

Otto Mueller is well-known for the landscape and nude depictions, especially bathers, that he produced throughout his career. The arcadian and idyllic landscapes and nude images are combined with an Expressionist approach. Later works from the 1920s include gypsy life scenes influenced by his trips to Eastern Europe. 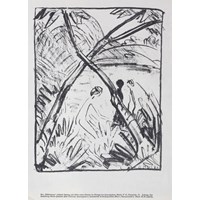 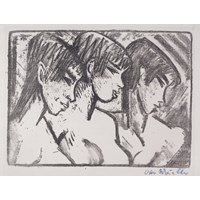 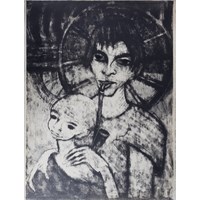 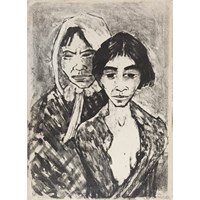