The 2nd edition of a book containing articles and artwork by members of the Blue Rider Group of artists, 1914. 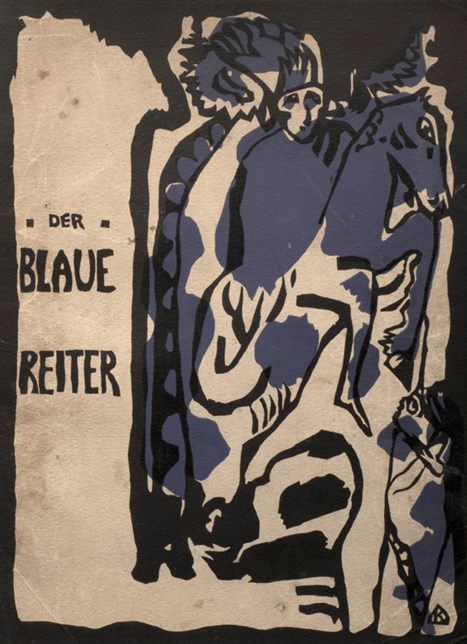 The museum and deluxe editions contained two woodcuts, Kandinsky's Bogenschütze (The archer) and Marc's Fabeltier (Animal from a Fable).

What was the Blue Rider Almanac?

The Blue Rider (Der Blaue Reiter) Almanac was published in 1912, by Reinhard Piper in Munich. The editors were Wassily Kandinsky and Franz Marc, the co-founders of the Blue Rider artists’ group.

In publishing the almanac, the two young artists hoped to bring together the newest and most revolutionary achievements in modern art and present them to a supportive and enlightened readership.

The almanac contains reproductions of paintings and illustrations by artists from El Greco to Van Gogh, Matisse, Picasso, Rousseau, the Brȕcke artists Kirchner and Heckel. The Blaue Reiter artists and others are included, with non-European objects and images from Latin America, Alaska, Japan and Africa.

Essays by Marc, Kandinsky and Macke sit alongside music scores by Scriabin and Schoenberg. This wide-ranging selection vividly illustrated an anti-academic, open-minded, international, and tolerant vision. Painters, composers, and critics from different nations all wrote contributions in which they articulated the goals of this new art. Kandinsky’s and Marc’s statements, in particular, express their shared belief in searching for the “spiritual in art.”

Why was the almanac important?

The publication of the almanac was a collective, international and interdisciplinary undertaking. It is viewed as one of the twentieth century’s most important artistic documents to investigate the relationship between the arts in the modernist period (c.1890-1939).

The editors had succeeded in presenting an eclectic mix of material from different cultures and eras – and in doing so, demonstrated an important principle - that all authentic manifestations of art could be united by their expressive form, not by their content. In other words, all art, irrespective of culture, that demonstrated a genuine expressive urge could be placed together in a unity, or synthesis, superficial questions about its technical or artistic quality becoming irrelevant.

The first edition of the Blue Rider Almanac ran to 1200 copies, and quickly sold out. The book was an anthology containing fourteen major essays, more than 140 illustrations and a supplement in which a number of musical scores are reproduced. A deluxe edition of 50 copies was specially bound in blue leather, which also contained two woodcuts, (Bogenschütze) Archer, by Kandinsky; and Fabeltier (Fantastic Creature), by Marc.

Kandinsky contributed two articles as well as the text and stage direction [libretto] of his play Der Gelb Klang (The Yellow Sound).

Originally conceived as the first of a series of periodicals, only the first issue was published, but it remains arguably the most important single document of pre-war Expressionism.

It has also been described as one of the first examples of a Gesamtkunstwerk, or ‘total work of art’, in that the essays, artworks, illustrations and musical scores were designed and placed to work together in a synthesis of unified thought, art, music and modernist vision.